Posted at 20:53h in Radio Arts in the news by staceyf 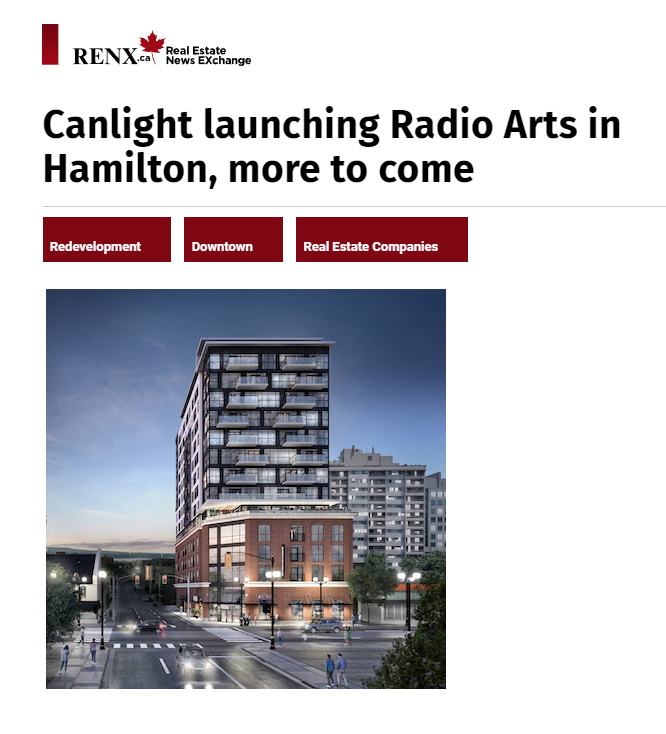 The Spirit of Radio is one of the best-known songs by Toronto rock band Rush, and it will also infuse a new Hamilton condominium development from Canlight Realty Corporation.

Radio Arts will be a 14-storey condo at 206 King St. W., at the corner of Caroline Street, which will be near two stops on Hamilton’s planned light rail transit line.

Canlight Realty founder and president Vernon Shaw has had an interest in the building for years. It was built in 1908, housed radio station CHIQ midway through the last century and was later used as warehouse space for a wholesale business that provided hotel supplies and equipment.

It wasn’t the most desirable location in Hamilton, but it was a very convenient location,” Shaw said of the downtown site.

Shaw was introduced to the family that owned the building half-a-decade ago and kept in touch until he was able to acquire it for an undisclosed price in an off-market deal.

“I told them that we would do all of the legwork and would have an understanding that if we were successful in achieving a certain amount of development approval, then we would close the deal and they would be better off than if we were to buy it (at the time),” said Shaw.

While the building is in rough shape and will be demolished, Radio Arts’ four-storey podium will pay homage to its original design in its masonry details and arched windows.

Part of a mosaic tile floor, black-and-white photos, original beams, metal barn-style doors and some vintage plumbing fixtures will be salvaged and incorporated into the new building.

The condo units will have names associated with radio and its elevator lights will look like studio lights in keeping with Radio Arts’ theme.

Burlington architecture firm KNYMH Inc. and Hamilton-based Erika McCarthy and her team at Baudit Interior Design will help Canlight bring the vision to life, while Norstar and its co-founder Gary Silver will oversee construction.

Zoning approvals are in place. Shaw hopes to have site-plan approval by the end of the summer so construction can begin to meet an autumn 2024 target completion date.

When completed, Radio Arts will have 122 units with an average size of nearly 600 square feet. The plan is for a mix of studio, one-bedroom, one-bedroom-plus-den, two-bedroom and three-bedroom configurations. There will be ground-floor retail space that will likely include a coffee shop.

Amenities will include: digital concierge services; a second-floor fitness studio; a fifth-floor co-working space, Wi-Fi lounge and terrace; and a 14th-floor social lounge leading out to a rooftop terrace.

Radio Arts will be the first development in Hamilton to feature stacked vehicle parking, providing 36 spots in 12 stackers which can accommodate three cars apiece, as well as ample bicycle storage space.

Sales will begin soon and pricing will be announced at that time.

Radio Arts will be close to independent and boutique shops, restaurants, bars and the FirstOntario Centre entertainment venue and arena that will undergo a major renovation.

The Pier 8 development will revitalize the neighbouring waterfront with approximately 1,500 residential units and 140,000 square feet of commercial and institutional space.

Young families and artistic people have been moving from hip but gentrifying areas of Toronto, such as West Queen West, to go farther west to Hamilton for affordability reasons.

“My theory is that you should always look to see where the artists are going because they’re always looking for not just cheap, but interesting places to live,” said Shaw.

“A few years ago you could buy a house similar to one in (Toronto’s) Cabbagetown for literally one-third of the price (in Hamilton). That’s not true anymore, but there’s still a considerable gap.

“And there’s a community there. As a developer, you pick up on those vibes and follow them.”

Mississauga-based Canlight Realty is the development division of The Canlight Group of Companies, which Shaw also co-founded in 1991.

The Canlight Group is an integrated real estate services company with experience in acquiring, developing, constructing and managing both residential and commercial properties.

The Canlight Group has 4.5 million square feet of assets under management in 70 properties with a market value of $2 billion. It has a staff of more than 30 and responsibility for more than 50 site personnel.

Canlight started off as a small investment company that bought residential real estate using pools of money from various investors.

It purchased approximately 25 residential apartments with about 2,000 units that weren’t in great shape, but were redeveloped and converted to condos and sold over a period of years.

Canlight was part of publicly traded Dundee Realty early on in that company’s history, before being spun off and becoming a private firm again.

“Selling units in Hamilton in those days was not easy,” said Shaw. “It was a hard sell, but we did really, really well and sold out much quicker than anyone expected.

The company’s past projects include: The Derby Lofts, Camden Lofts and Ancroft Place in Toronto; Huron Park Heights in Mississauga; Grandview Condominiums in Newmarket; The Regency in Kitchener; and developments in Abbotsford, B.C. and Phoenix.

“We look for things that are interesting or somewhat intricate. We’re very selective. We want something that’s not just a building. If we see a vision, that’s what we look for.

“We don’t have a defined strategy. We have three or four projects on the go and when we run out of projects then we start looking again.”

Canlight has three other development sites in its pipeline.

“We want to do things right and not go too quickly,” said Kason. “We’re not into growth for growth’s sake. We want to do interesting things, enjoy what we do and give people a great space to live in afterward. That’s what drives us.”

“The city is very supportive because it would like to see more density there,” said Kason.

Canlight owns a waterfront gateway site in Burlington currently occupied by an income-producing residential property. The company is in no rush to transition it, but Kason said the city’s previous administration was supportive of an 18-storey residential building.

A larger neighbouring property will be redeveloped and Canlight wants to piggyback on that project to make the area a bigger draw.

Canlight owns a 4.5-acre site in Kitchener beside a three-acre parcel of land owned by another developer. Canlight’s property is occupied by a profitable retail plaza, but Kason said it can be reconfigured into a higher and better use.

The combined 7.5-acre site could support 1,000 residential units which could be built over the next five to 10 years.

“They all are making money as they sit, so none of them have the pressure that we have to do something,” Kason said of the three sites. “We’re going to do them as we find that the market is right and we want to harvest.

“And it’s time now. The pandemic has made price points in Burlington, Hamilton and Kitchener go up to the extent that it’s time to harvest.”

See the article on RENX.ca