Posted at 21:55h in Radio Arts in the news by staceyf 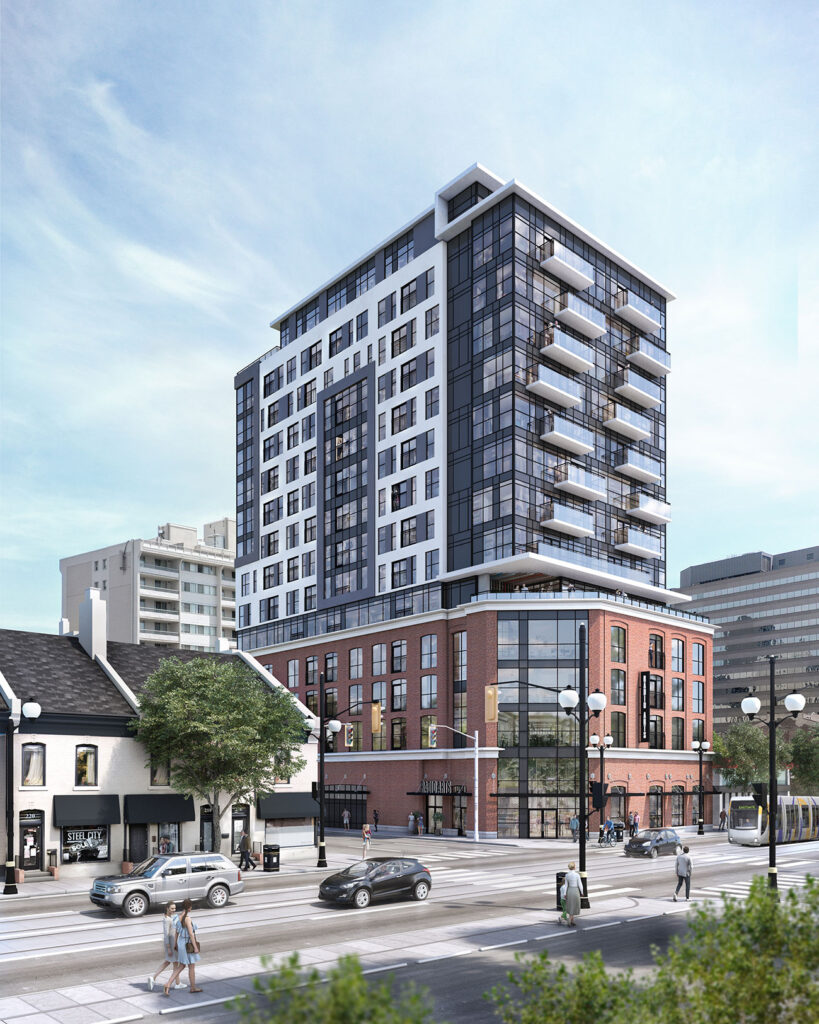 As if sending out a signal to the younger generation, the newly-slated Radio Arts building imbues contemporary architecture with cultural street cred. Located in Hamilton’s downtown core, the 14-storey Radio Arts development was once home to the former CHIQ radio station.

“While the units in this building will have open-concept design, we pay homage to the building’s past,” says Vernon Shaw, developer and co-founder of Canlight Realty Corporation. Shaw’s other Hamilton development includes the beloved Pigott Building.

Shaw noticed a gap in housing for young professionals who hadn’t yet had the opportunity to enter the market. “Whether for McMaster graduate students or just young professionals, there is a place for anyone here at Radio Arts,” he says….

With units ranging from 500-1000 sq. ft. – all fall under the $800,000 price point, making it an ideal first foray into dire housing market where inventory is lacking. Large units, such as 2-and-3-bedrooms will occupy the top floors.

Yet for those who opt for small living quarters – Shaw says that he anticipates those buyers will likely conduct much of their lives in the building’s amenity spaces, including its ground floor café. “I imagined it like the Central Perk café in Friends – a gathering place where friends would meet up,” says Shaw.

The building also houses a fitness/ yoga studio and shared office space (sort of like WeWork) so that even those working remotely don’t have to be confined to a studio apartment.

A large rooftop lounge space with outdoor bbq areas offer adds another major amenity space, one with 360 degree views of Hamilton and the Hamilton Harbour.

“From what I see, there’s definitely a renaissance of youthful, creative energy in Hamilton’s downtown core,” says Shaw, who anticipates that the building will also revitalize the infrastructure in the area.

Shaw says it’s a vision that foresees a community of young people occupying a new part of the city and bringing in new life to a once-booming area. Occupancy is slated for 2024.

Erika McCarthy, partner at Baudit Interior Design, says the project is reflective of a growing arts and culture community within the downtown core: “There’s a distinct vibe in the city that plays on the sophistication of brick and beams while inspiring creativity,” she says.

“I’ve seen how Hamilton has grown with the arts, music, and food scenes. Still, Hamilton’s approachability has been consistent, and it’s important that the design of Radio Arts reflected this in the interior design.”

Shem Myszkowski, architect and president of KNYMH Inc., says working with Shaw for the past five years has been an evolution in vision for the Radio Arts building, originally built in 1908. “This is really a cornerstone building for Hamilton, so we designed it to reflect the heritage of the original building – and the street itself.”

While much of the old building was not salvageable, Myszkowski says that some original materials will be reintegrated into the lobby – especially some gems that arose from slowly peeling back the layers of the building.

“There are remnants of original mosaic tiles that spell out ‘Radio Arts’ that we will keep to add to the vintage aesthetic. Old brickwork will be reclaimed and reused in the interior lobby,” he says. “It’s really about trying to preserve as much of that architectural history and character as possible.” Original beams and metal barn-style doors will also be reincorporated into the new design of the building.

A four-storey podium will be rebuilt as an architectural homage to the original building with its arched windows, old timber, and masonry design. North of the podium, a black and white-clad condo tower features staggered balconies, large windows and open-concept units. “In some ways, the building itself is metaphor for how Hamilton has evolved over time from its heritage buildings to an urban and contemporary present,” says Myszkowski.

With a special robotic parking system manufactured by Klaus, the Radio Arts building is optimizing its space. “The site is fairly tight on space,” says Myszkowski. “But with a stacker system, this prevents us from having to excavate the site. It also allows for more cars to be accommodated.”

That said, it’s possible that many buyers won’t even have cars to park. “This sits right on the LRT corridor,” says Myszkowski. “So it taps right into the infrastructure. This building will be the perfect storybook or poster boy of what an LTR development can do for a city. For residents, the LRT will be the main artery for how they get around Hamilton.”

It’s a building that marries the best of Hamilton’s cultural history to its new vision of a revitalized creative class.

Read the full article on The Toronto Sun